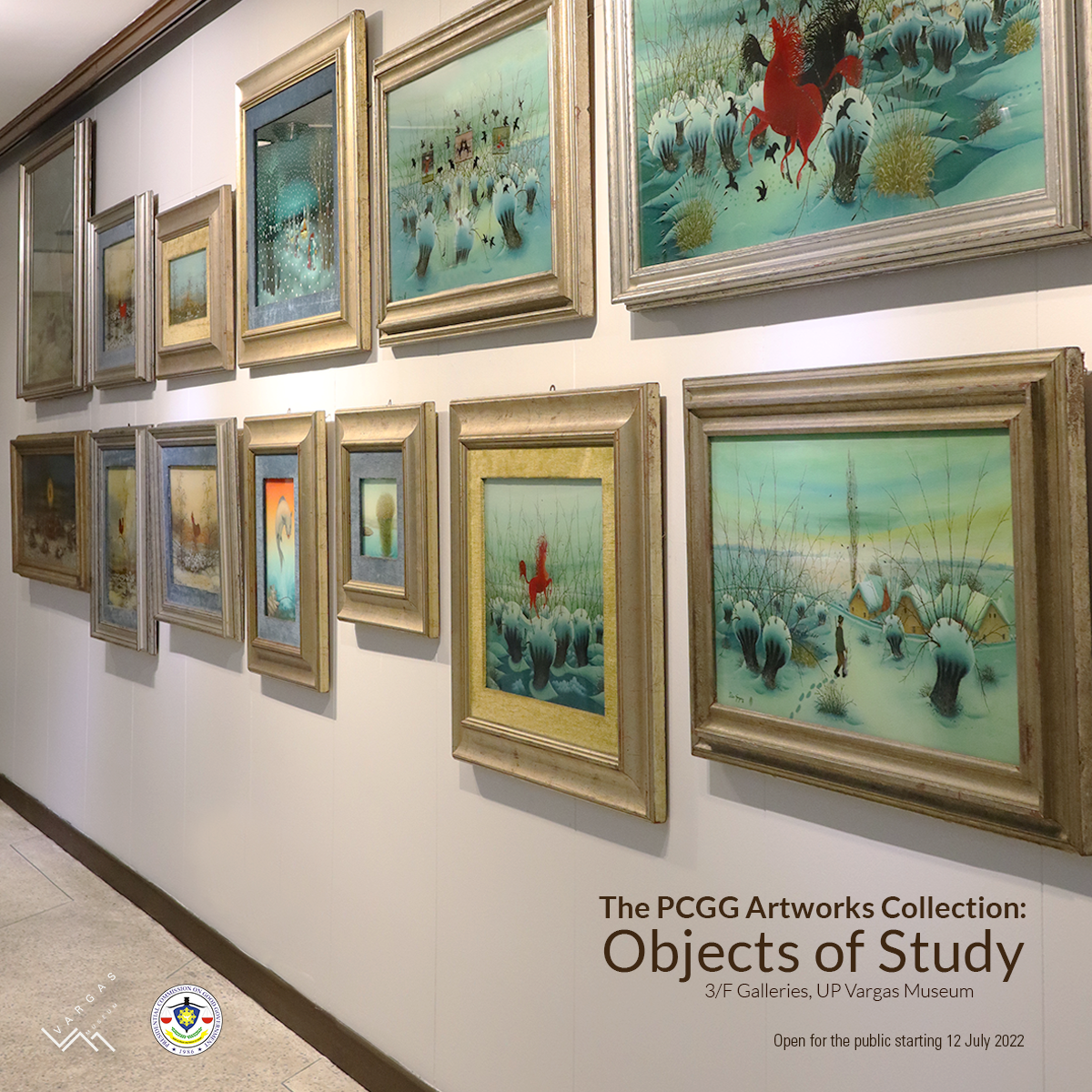 The PCGG Artworks Collection: Objects of Study
open for the public starting 12 July 2022
3/F Galleries
UP Vargas Museum
The University of the Philippines Vargas Museum, in partnership with the Presidential Commission on Good Government (PCGG), presents The PCGG Artworks Collection: Objects of Study, an exhibition of selected art works sequestered by the PCGG from a trove of pieces traced to the family of former President Ferdinand Marcos as part of its mandate to recover wealth of contentious acquisition. Consisting of works from Italy, the former Soviet Union, and former Yugoslavia, the collection will be available for the public to view by prior appointment starting 12 July 2022 at the UP Vargas Museum North Wing and Sensorium galleries and corridors.
The collection in this exhibition, which is temporarily kept by the Vargas Museum, presents an assembly of difficult but also attractive objects. These objects are art from Europe, some originally meant for worship, others for patrons, some made by known artists, others supposedly by peasants. They are paintings on canvas, glass, and wood; crafted from the tradition of lacquer, the medium of egg tempera and copper, the ornament of gold leaf, among others. Most of all, they are objects that are the subject of study. To study is to inquire, research, investigate with the view of exploring the unknown, revisiting the familiar, grasping the tricky, even inviting the failure to understand. It is a chance to probe the preconceived, challenge the widely-held, and finally render the objects sensible: thoughtfully felt and imagined to be signifying something else.
In 1986, after the regime of Ferdinand and Imelda Marcos fell through an uprising incited by a military coup, the succeeding government of Corazon Aquino seized the properties of the Marcos family, its subordinates, and associates. Through Executive Order 1, the PCGG was formed specifically to “recover ill-gotten wealth.” Among those sequestered were found at the Metropolitan Museum of Manila—conceived by Imelda in 1976 as a site to display non-Philippine art which would “increase the Filipino people’s awareness of the cultures of the world.” Since then, a number of paintings, including the ones by Botticelli, Raphael, and Titian, had been disposed of by the PCGG through auction, the proceeds going towards agrarian reform. But some pieces remained.
The exhibition addresses the need to situate these cultural objects within a social context, to productively appreciate and to come to terms with the layers of difficulty presented by the PCGG Artworks Collection in its implication of a complex political history. Inscribed in looking at and seeing through and around the images are the history of their shifting possessions and the political, ethical, and moral trouble they pose. They are entangled in the matrix of refinement and excess, identity, prestige, taste, power and beauty, development, nationalism and internationalism, acquisitiveness, Cold War, Third World, Martial Law, New Society, People Power. To appreciate it is to necessitate a sensitive response to art and its layers built from within the material as well as its social dimensions.
Pieces from the PCGG Artworks Collection in this exhibition remain under litigation and research on the sequestered property continues.
For further inquiries, email vargasmuseum@up.edu.ph. To book an appointment to visit, you may use the Appointment Booking tool on the museum’s Facebook Page @vargasmuseum.upd, or reach out to us on Instagram @upvargasmuseum or email. For updates on events, exhibitions, and advisories check the website https://vargasmuseum.org, Twitter @upvargasmuseum, Facebook, or Instagram.
Toggle the Widgetbar