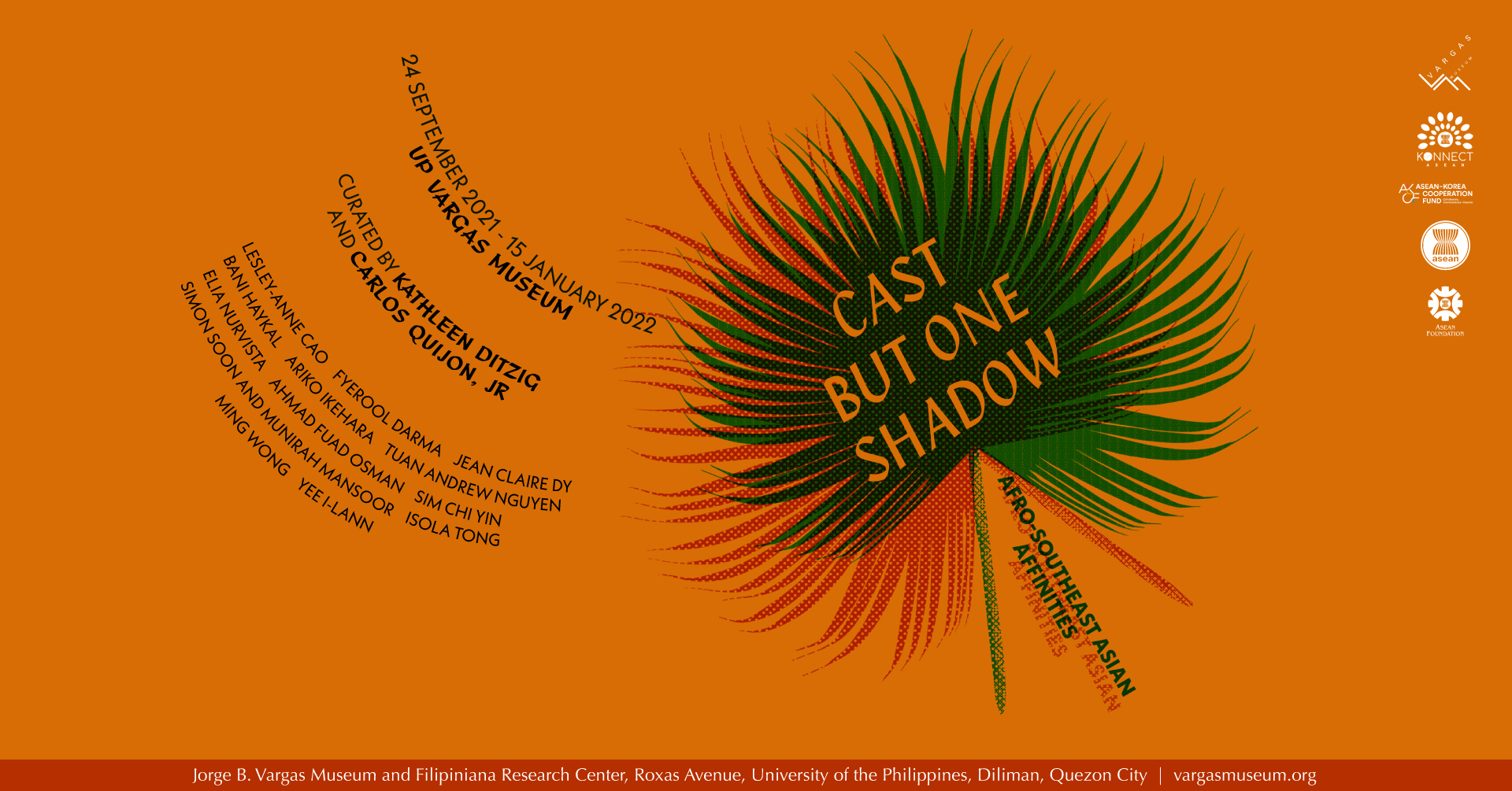 Cast But One Shadow pursues the thematic threads of racial presence, anti-colonial struggle, and the interventive ways of navigating colonial and neocolonial relations through Southeast Asia. The title of the exhibition is adapted from a 1962 novella authored by Han Suyin, a Eurasian physician, novelist, and public intellectual with Chinese and Belgian parentage. It was one of the last books she published while living in Malaya, two years before she left the country in the wake of controversies involving her opposition to the merger of Singapore with the rest of the Malayan states into the Federation of Malaysia. The exhibition focuses on the complex regional historical milieu that Han worked in as an important source of illumination in the history of archipelagic Southeast Asia and the discourses around decolonial affinities.

The art works in the exhibition are research projects that both interrogate histories and speculatively project history into the future. For example, Tuan Andrew Nguyen’s The Specter of Ancestors Becoming (2019) examines the history of the Tirailleurs sénégalais, Senegalese soldiers deployed to suppress Vietnamese uprisings against French rule, and the enduring legacies of colonial prejudice and imaginations of power through the perspectives of Vietnamese-Senegalese descendants; Lesley Anne Cao’s AI-aided fabrication of lingling-o, jade ornaments that have circulated across mainland and maritime Southeast Asia and Taiwan, attests to the intricate intimacies among territories in the South China Sea; and, Ahmad Fuad Osman’s artistic research looks at the life and time of Shaykh Yusuf of Makassar, a 17th century Sufi scholar who was exiled from Makassar to South Africa by the Dutch and while there was instrumental in the formation of the Muslim community at the Cape of Good Hope, eventually known as “Cape Malay.”

Beyond art works that flesh out transregional communities of exchange, the exhibition also features art works that examine specific Cold War political imaginations of race and affinity. An installation by Elia Nurvista on the history and politics of international food aid programs, Ariko Ikehara’s community project on Teruya, a “black district” in Okinawa (1950-1970s), and bani haykal’s sound installation that examines America’s jazz diplomacy in Southeast Asia, unravel the complicated legacies of racial segregation and the historical consequences of the discourse of the color line, Cold War entanglements of Civil Rights movements, and the expansion of American empire after World War II.

Art works by Fyerool Darma, Simon Soon and Munirah Mansoor, and Yee I-lann cast a regional lens upon the enduring legacies of such Cold War era imaginations of affinity by speaking to imaginations of Maphilindo, a short-lived confederation in 1963 between then Malaya, Indonesia, and the Philippines. Maphilindo was built on a shared imagination of a civilizational and racialized pan-Malayan identity that spanned archipelagic Southeast Asia, Polynesia, and as far as Madagascar. The confederation was the precursor to the Association of Southeast Asian Nations established in 1967.

Engaging specifically with how “Chineseness” was understood within this historical milieu, newly commissioned work by fictionist and filmmaker Jean Claire Dy unpacks her family history of being Chinese in the Philippines; photographs by Sim Chiyin mines the British Imperial War Museum’s archive for the residual traces of the trope of the “bandit” and the anti-colonial jungle fighter in the history of the Malayan emergency; and Ming Wong’s video poem Hand-in-Hand (2019) sees him take on the role of cultural ambassador visiting contemporary infrastructure, such as the Museum of Black Civilizations, built in Senegal with China’s aid, implicitly illustrate how racial connotations are tied to geopolitical struggles and dominant world systems.

Alongside the art works, the exhibition converses with the library and art collection of the Vargas Museum as well as a range of historical materials. These materials focus on the transnational cultural production of Han Suyin, diplomatic gifts of paintings from former Indonesian President Sukarno to his contemporary Philippine President Diosdado Macapagal, and cinematic projects like Apocalypse Now (1979), and Blaxploitation films, such as the 1974 movie Savage Sisters that was directed by Eddie Romero, films wherein the jungles of the Philippines stand in for Vietnam and Latin America and in doing so conflate neocolonial imaginations of the “Third World.”

A newly commissioned outdoor installation by architect and visual artist Isola Tong elaborates on these historical conjunctures using the Philippines as an entry point. Tong’s research mobilizes the human-animal hybrid tropes of the 1972 Blaxploitation film Twilight Men and looks at the Marcoses’ importation of safari animals from Kenya to create the Calauit Safari Park in Palawan, displacing its indigenous peoples.

From the color line to Maphilindo, to contemporary retrospections upon Cold War solidarities, Cast But One Shadow takes heed of how race and racial presence informed arguments for sovereignty and expansive imaginations of the region during the Cold War and how these imaginations endure and color our contemporary world.

The third and final iteration of this project will be presented in the Republic of Korea in 2022. The project represents one of the first initiatives by the ASEAN Foundation to examine an expanded and global history of Southeast Asian regionalism.

ASEAN has, since its inception, done much to facilitate people-to-people exchange in the arts sector across Southeast Asia to encourage dialogue and debate. This unique space for artistic discourse that allowed for pluralistic notions of what constituted a regional artistic identity and aesthetic is one of ASEAN’s great legacies and is widely discussed, researched, and acknowledged by a new generation of art historians and curators.

In 2019, the Republic of Korea celebrated 30 years of diplomatic relations with ASEAN. In the same year the ASEAN-Korea Cooperation Fund (AKCF) supported KONNECT ASEAN - An ASEAN-Republic of Korea Arts and Cultural Program. Administered by the ASEAN Foundation, KONNECT ASEAN signals both an eagerness by ASEAN to revitalize its once integral role in contemporary visual arts and Korea’s sincerity in establishing closer ties with ASEAN.